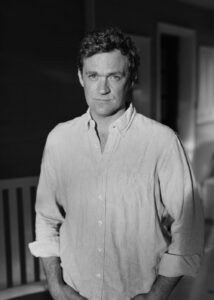 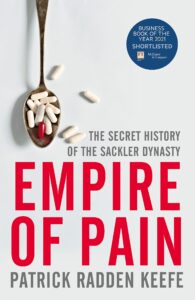 Patrick Radden Keefe is an award-winning staff writer at The New Yorker magazine and author of the New York Times bestsellers Empire of Pain and Say Nothing, as well as two earlier nonfiction books: The Snakehead and Chatter. His most recent book is Rogues: True Stories of Grifters, Killers, Rebels and Crooks.

Patrick started contributing to The New Yorker in 2006. He received the National Magazine Award for Feature Writing in 2014. Say Nothing received the National Book Critics Circle Award for Nonfiction, as well as the Orwell Prize for Political Writing, and was selected by Entertainment Weekly as one of the “10 Best Nonfiction Books of the Decade.” Empire of Pain was awarded the Baillie Gifford Prize for Nonfiction and was a finalist for the FT Business Book of the Year.

He is also the writer and host of WIND OF CHANGE, an 8-part podcast series, which investigates the strange convergence of espionage and heavy metal music during the Cold War, and was named the #1 podcast of 2020 by The Guardian.

Patrick grew up in Dorchester, Massachusetts and went to college at Columbia. He received masters degrees from Cambridge University and the London School of Economics, and a law degree from Yale. He is the recipient of a Guggenheim fellowship, and fellowships from the New America Foundation, the Woodrow Wilson International Center for Scholars, and the Cullman Center for Scholars and Writers at the New York Public Library.

He lives in New York.

Patrick Radden Keefe has generously donated time to the Friends of the Ashland Public Library for our online Author Confidential Auction, helping raise funds to support our library programs for all ages. We are so grateful!