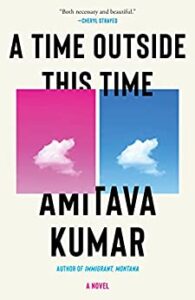 Amitava Kumar is a writer and journalist. He was born in Ara, and grew up in the nearby town of Patna, famous for its corruption, crushing poverty and delicious mangoes. Kumar is the author of several books of non-fiction and three novels. In 2016, Amitava Kumar was awarded a Guggenheim Fellowship (General Nonfiction) as well as a Ford Fellowship in Literature from United States Artists. He has also been awarded writing residences by Yaddo, MacDowell Colony, the Rockefeller Foundation at Bellagio, the Norman Mailer Writing Center, Writers Omi at Ledig House, and the Lannan Foundation. Kumar lives in Poughkeepsie, in upstate New York, where he is the Helen D. Lockwood Professor of English at Vassar College.

Kumar’s new novel, A Time Outside This Time, was published in October, 2021 by Knopf. It was published by Hamish Hamilton in Canada, Aleph in India, and  by Picador in the UK. His last novel Immigrant, Montana: A Novel, published by Faber in the UK, Knopf in the US, and in translation by other publishers worldwide, was named a notable book of the year by The New York Times, a book of the year by The New Yorker, and listed by President Barack Obama as one of his favorite books of 2018. The book came out in India under the title The Lovers: A Novel.

Lunch with a Bigot was included in a list of “ten best books of 2015 published by university presses”; A Foreigner Carrying in the Crook of His Arm A Tiny Bomb was adjudged the best nonfiction book of the year by the Page Turner Awards in 2011; in 2007, Home Products was short-listed for India’s premier literary award, the Crossword Award; Husband of a Fanatic was an “Editors’ Choice” book at the New York Times; Bombay-London-New York was on the list of “Books of the Year” in The New Statesman (UK); and Passport Photos won an “Outstanding Book of the Year” award from the Myers Program for the Study of Bigotry and Human Rights in North America.

Amitava Kumar’s writing has been published in The New York Times, Granta, NPR, The Nation, New Yorker.com, Harper’s, Bookforum, The Guardian, Kenyon Review, Vanity Fair, Guernica, New Statesman, Transition, American Prospect, The Chronicle of Higher Education, Toronto Review, Colorlines, Biblio, Outlook, Frontline, India Today, The Hindu, Himal, Herald, The Friday Times, The Times of India and a variety of other venues. He is the script-writer and narrator of the prize-winning documentary film, Pure Chutney (1997). In 2013, Amitava Kumar collaborated with Teju Cole on an ekphrastic project entitled “Who’s Got the Address?”

Amitava Kumar has generously donated time to the Friends of the Ashland Public Library for our online Author Confidential Auction, helping raise funds to support our library programs for all ages. We are so grateful!