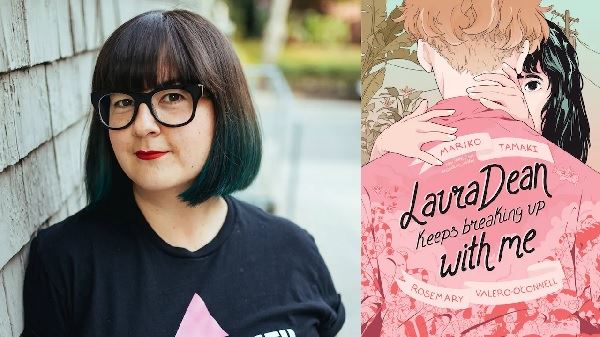 We are so pleased to be partnering with OUT Metrowest to bring this book club for the LGBTQ+ community to our area! If you are 15-25 years old (or thereabouts), identify as LGBTQ+ and would like to chat about books that celebrate LGBTQ+ joys, and to use books as a springboard to discuss the challenges, we hope you can join us. This month’s book selection is Laura Dean Keeps Breaking Up With Me by Mariko Tamaki. This book club will be facilitated by librarians from the LGBTQ+ community and members of OUT Metrowest.

About the book:
Author Mariko Tamaki and illustrator Rosemary Valero-O’Connell bring to life a sweet and spirited tale of young love in Laura Dean Keeps Breaking Up with Me , a graphic novel that asks us to consider what happens when we ditch the toxic relationships we crave to embrace the healthy ones we need. Laura Dean, the most popular girl in high school, was Frederica Riley’s dream girl: charming, confident, and SO cute.

There’s just one problem: Laura Dean is maybe not the greatest girlfriend. Reeling from her latest break up, Freddy’s best friend, Doodle, introduces her to the Seek-Her, a mysterious medium, who leaves Freddy some cryptic parting words: break up with her. But Laura Dean keeps coming back, and as their relationship spirals further out of her control, Freddy has to wonder if it’s really Laura Dean that’s the problem. Maybe it’s Freddy, who is rapidly losing her friends, including Doodle, who needs her now more than ever. Fortunately for Freddy, there are new friends, and the insight of advice columnists like Anna Vice to help her through being a teenager in love.

Mariko Tamaki is the author of the YA novel Saving Montgomery Sole and the co-creator of award-winning comics This One Summer and Skim (with Jillian Tamaki), and Emiko Superstar (Steve Rolston). In 2015, This One Summer received Printz and Caldecott Honors, the Eisner for Best Graphic Album–New, Canada’s Governor General’s award, and 4 starred reviews. Her 2019 Laura Dean Keeps Breaking Up With Me is the recipient of 5 starred reviews, including Kirkus and Horn Book, and was named a Printz Honor Book and as the “Best Children’s or Young Adult Book” at the Harvey Awards  – as well as receiving the 2020 Walter Dean Myers Award. Mariko maintains a solid fascination with the complex process by which teenagers become, or try to become, grown-ups.

She has also written for BOOM! Studios, Marvel, and DC Comics, working with She-Hulk and Supergirl.

Mariko Tamaki began her career as a playwright and performance artist in Toronto, Ontario, working with fat activists Pretty, Porky and Pissed Off and performing and writing plays for Buddies in Bad Times Theater, a world leader in developing queer voices for the stage.  Her first film, “Happy 16th Birthday, Kevin,” premiered at the Inside Out Festival in 2013.

In addition to her literary work, Mariko holds a Master’s in Women’s Studies and worked for two years on a doctorate in Linguistic Anthropology.  Her academic research focused on accents used in drag cabaret performances.  Her research inspired an ongoing obsession with the way people talk.

You can order a copy of the book from our online catalog or we’ll have several copies in the library if you’d like to come by and pick one up. This book is also available as an ebook on Libby.

Please REGISTER here for this event. You will receive a program link in the confirmation and reminder emails. If you have any questions, feel free to contact us at ashlandprograms@minlib.net.

This program is sponsored by the Friends of the Ashland Public Library and OUT Metrowest.