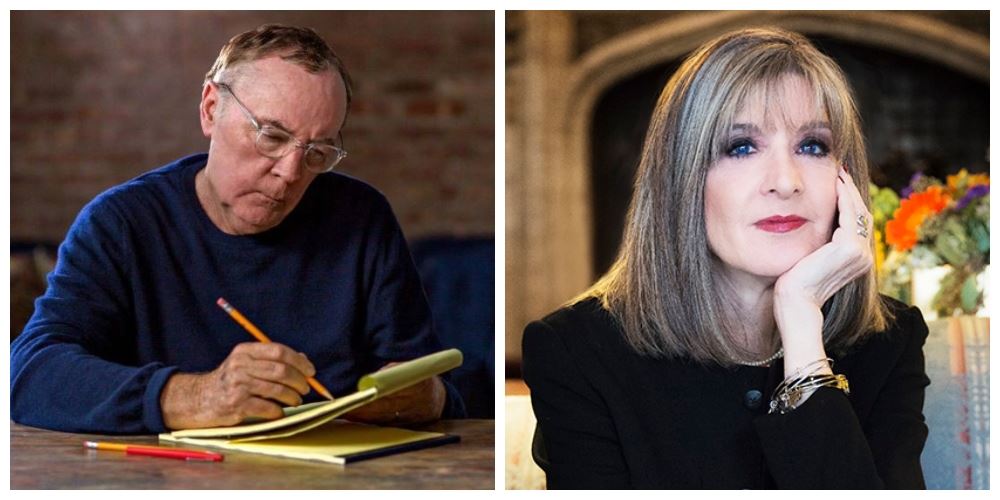 Who hasn’t heard of prolific author James Patterson? We’re thrilled to welcome him to Ashland, in conversation with fantastic interviewer (and amazing mystery writer) Hank Phillippi Ryan. Learn all about their newest books, what’s the secret to collaborations, and how he creates books for all ages. It’s going to be epic!

James’ newest book is The Jailhouse Lawyer and Hank’s is Her Perfect Life. You can purchase signed books from Haley Booksellers.

Please register for this event.

James Patterson is the world’s bestselling author. His enduring fictional characters and series include Alex Cross, the Women’s Murder Club, Michael Bennett, Maximum Ride, Middle School, and Ali Cross, along with such acclaimed works of narrative nonfiction as Walk in My Combat Boots, E.R. Nurses, and his autobiography, James Patterson by James Patterson. Bill Clinton (The President Is Missing) and Dolly Parton (Run, Rose, Run) are among his notable literary collaborators. For his prodigious imagination and championship of literacy in America, Patterson was awarded the 2019 National Humanities Medal. The National Book Foundation presented him with the Literarian Award for Outstanding Service to the American Literary Community, and he is also the recipient of an Edgar Award and nine Emmy Awards. He lives in Florida with his family.

Hank Phillippi Ryan is the USA Today bestselling author of 13 thrillers, winning the most prestigious awards in the genre: five Agathas, four Anthonys, and the coveted Mary Higgins Clark Award. She is also on-air investigative reporter for Boston’s WHDH-TV, with 37 EMMYs and dozens more journalism honors. Book critics call her “a master of suspense,” “a superb and gifted storyteller,” and she’s the only author to have won the Agatha in four different categories: Best First, Best Novel, Best Short Story and Best Non-Fiction. Her 2019 standalone, The Murder List, won the Anthony Award for Best Novel. International bestseller A.J. Finn says, “exciting, explosive, relentless,” and the Library Journal starred review calls it “A must-read.” Hank’s 2020 novel is the chilling psychological standalone The First to Lie,  nominated for both the prestigious Anthony Award for Best Novel and Mary Higgins Clark Award. The Publishers Weekly starred review says “Stellar…Ryan could win a sixth Agatha,” and bestseller Sarah Pekkanen says “Book clubs will gobble it up.” Watch for Her Perfect Life on September 14, which received starred reviews from Kirkus and Publishers Weekly, which called it “A superlative thriller.”

This program is sponsored by the Friends of the Ashland Public Library, hosted by the Morrill Memorial Library, and supported by a consortium of MA libraries.