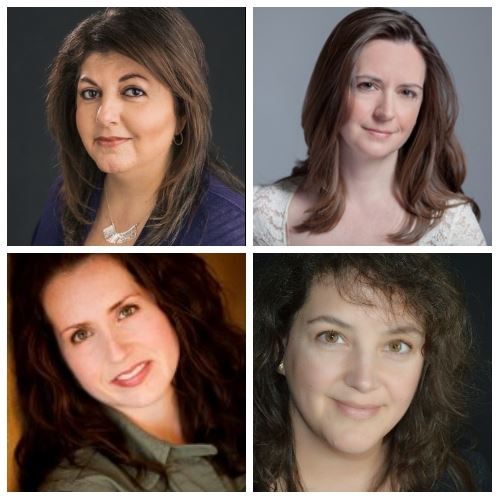 We’re celebrating some book birthdays! Caroline Linden’s new book, A Scot to the Heart and Vivienne Lorret’s The Wrong Marquess just came out and we are loving them! They are joined by pals Sophie Jordan and Diana Quincy, whose upcoming books The Duke Goes Down and The Viscount Made Me Do It are much anticipated. Join us for this conversation about books, history, romance, and the question we all need answered: What happens when a Duke, a Scot, a Viscount, and a Marquess walk into a tavern? 🙂
Click here to register! You’ll receive the link in the confirmation and reminder emails. Make sure to check your spam folder for them–they will be coming from ashlandprograms@minlib.net.

You can buy signed (by bookplate) books from all of our authors through Bank Square Books! Just click on the link, make your purchase, and say that you want the books signed in the notes at checkout.

Caroline Linden was born a reader, not a writer. She earned a math degree from Harvard University and wrote computer code before discovering that writing fiction was far more fun. Since then, the Boston Red Sox have won the World Series FOUR times, which is not related but still worth mentioning. Her books have been translated into seventeen languages, and have won the NEC-RWA Reader’s Choice Award, the Daphne du Maurier Award, the NJRW Golden Leaf Award, and RWA’s RITA Award. She lives in New England.

USA Today bestselling author Vivienne Lorret transforms copious amounts of tea into words. She is an Avon author of works including the Wallflower Wedding series, the Rakes of Fallow Hall series, the Season’s Original series, and the Misadventures in Matchmaking series. For more information on her books, sign up for her newsletter.

Sophie Jordan grew up in the Texas hill country where she wove fantasies of dragons, warriors, and princesses. A former high school English teacher, she’s also the New York Times and USA Today bestselling author of Avon historical romances. She now lives in Houston with her family. When she’s not writing, she spends her time overloading on caffeine (lattes and Diet cherry Coke preferred), talking plotlines with anyone who will listen (including her kids), and cramming her DVR with true-crime and reality-TV shows. Sophie also writes paranormal romances under the name Sharie Kohler.

Of Middle Eastern descent, Diana Quincy grew up all over the world as the daughter of a United States Foreign Service Officer. After college, she became a television journalist, but quickly decided it was much more fun to make up stories where a happy ending is always guaranteed.

Since her 2013 debut, Diana’s books have landed on annual “Best of” lists in Library Journal and The Washington Post.

Diana is now happily settled in Virginia, but still gets the itch to explore far-off places. When she’s not bent over her laptop, Diana spends time with her family, reads, practices yoga and plots her next travel adventure.