We’re starting up our book club at the Senior Center! Please join us in person as we read and discuss The Paris Library by Janet Skeslien Charles. Based on the true World War II story of the heroic librarians at the American Library in Paris, this is an unforgettable story of romance, friendship, family, and the power of literature to bring us together. It’s the perfect book for this collaboration between the library and the Senior Center! 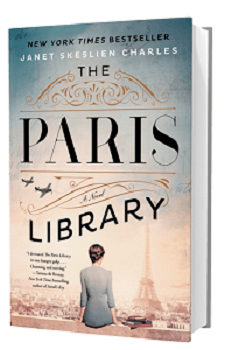 We’ll have some copies of the book at the library or you can order it from our online catalog.

Please call the Senior Center at 508-881-0140 x 1 a few days before the book discussion for contact tracing purposes.

Although this is hosted at the Senior Center — all are welcome.

Paris, 1939. Odile Souchet is obsessed with books and the Dewey Decimal System, which makes order out of chaos. She soon has it all – a handsome police officer beau, an English best friend, and a job at the American Library in Paris, a thriving community of students, writers, diplomats, and book lovers. Yet when war is declared, there’s also a war on words.

Montana, 1983. Widowed and alone, Odile suffers the solitary confinement of small-town life. Though most adults are cowed by her, the neighbor girl will not let her be. Lily, a lonely teenager yearning to break free of Froid, is obsessed by the French woman who lives next door.

As the two become friends, Odile sees herself in Lily – the same love of language, the same longings, the same lethal jealousy. The Paris Library’s dual narratives explore the relationships that make us who we are – family and friends, first loves and favorite authors.

The wit, empathy, and meticulous research that brings The Paris Library to life also brings to light a cast of lively real-life characters and a little-known chapter of World War II history: the story of the American librarian, Miss Reeder, who created the Soldiers’ Service to deliver books to servicemen, and who later faced the Nazi ‘Library Protector’ in order to keep her library open. She and her colleagues defied the Bibliotheksschutz by delivering books to Jewish readers after they were forbidden from entering the library.